What am I working on This Wednesday?

Friday night was the first Club Sew of the Fall. It was so great to reconnect with old friends and make new ones. I enjoyed helping a couple ladies with their projects, so I didn't get as much done on my own, but did manage to get 2 more Star Surround blocks done in the Frolic fabric.

These blocks are made out of leftovers of 3 Frolic quilts I had already made, all I'm adding is the background. I'm not sure I'll have quite enough for a backing, but plan to piece as many scraps into it as I can.

This is the original one I made to see how I would like it. It's more accurate of the cream color of the background.

I didn't find my last ahhhh piece at the shop like I expected, so I was terribly disappointed. Sunday morning I woke up and it was on the floor next to my bed. I'm not sure where it came from, but I was so excited to see it. I finished the stitching up Sunday night, so I have my 2 ahhhh's done for the month.

Sunday we needed tags for our car/pickup so we went to the kiosk in the mall to get them. It was a huge time/money saver, no lines and we didn't have to drive to Sturgis or take time off from work. Mikaela sat next to us and was patient (which is hard for a 2 1/2 year old), so we let her ride a ride. She chose the airplane and Mathew could go with her, so she was excited. They both seemed to enjoy it.

We are off to the cities for long weekend starting tomorrow. I teach tonight, so I did a marathon pack last night and hopefully we'll get headed out tomorrow morning fairly early. I'm hoping to find a few quilt shops along the way. We are attending a wedding in White Bear Lake on Saturday, so I found the quilt shop there to stop at. IKEA might also be on the list of gotta stop locations. I am so thankful I finished the quilts I plan to give last month, so all I need to do is wrap them and they are ready to gift. I've given away 5 quilts this week, which I think is a record!

Finish it Up Friday

This week I had one of my fastest finishes ever. I made this Star Surround for the quilt along on Sunday, quilted it Monday night and put the binding on and hand sewed it down on Tuesday. I love how quick and easy this pattern is.

I cut out a Star Surround with my leftover Frolic scraps and had made each 24" square into a kit. Tues night I sewed about half of the triangles and Wed. I squared them up at lunch. Last night I finished sewing and pressing all the hst's and flying geese and made this block. I hope to finish the other 3 blocks tonight at club sew and maybe even my last swoon. We'll see how much I can get accomplished.

Wed. night while I was teaching a class I worked on the hand work on this block, so as not to stand over the students and badger them. I could easily put it down and pick it back up randomly. Somehow I lost a triangle, so I am hoping it is at the shop and I can get it tonight.

This week I also worked on my Rubic Star. This is basically 1/4, minus the background, which was my goal for the month, so I'm excited to have it done and it came together really nice.

My friend Emilee gave me this awesome 1/2 gallon glass canning jar. It's perfect for storing the empty Aurifil spools, but it is also collecting my sewn leaders and enders. I haven't done a lot with L&E, but with the Bernina it seems to be better, so I'm trying to remember to do so. I am hoping to make a Briar Rose quilt with the 2.5" squares sewn together into 16 patches.

It's been a very productive week and I hope it continues tonight as we leave to go to Dad's to finish (hopefully) moving him this weekend.

Last week when I decided I "had" to participate in the Star Surround Quilt Along, even though it was almost over, I told myself I couldn't buy fabric, had to use my stash, and it had to have a purpose if I was going to make a new quilt. I had this leftover Central Park and the purple to match. I had the yellow in my stash of "solid/backgrounds" and I found the orange in the brights scraps. I cut into it at lunch last week and was ready to sew it, including marking all the HST's & Flying Geese. Sunday evening I spent time sewing. I made the 32" block and then added 7" borders on top and bottom, simply because I had enough fabric, wanted it bigger, and it was too big to just be a doll quilt. I also had enough of the fabric for the back. I really love how it turned out and am glad I found a home for it. Since it is 33"x 50" I was able to put it on my quilt frame the long way and only quilt 5 passes down it. It quilted up so beautiful with Aurifil Golden Yellow in both the top and bottom. After the trouble I had quilting the Blush quilt with Aurifil I swore I would never try again, but I have done two quilts since then and both turned out great. I put on the binding last night and hand sewed it down during lunch today. This quilt has a home, but I'm not sure if the mom reads my blog, so I'll wait to share who receives them until next week when they are gifted.
I LOVE this pattern and can't wait to make the one I have cut out in Frolic fabric. It uses up the scraps wonderfully and it's going to be so bright and cheery!

Sewing up a Storm in September!


While I got a great start on the wolf this month, it kind of stalled while I finished up several other projects. I've had the shoes fabric and pattern out to make Mathew some shoes for quite a while. I got them finished, only they don't fit his feet, so they'll become a baby gift.

During the recent Hexie Queen Blog Hop I was lucky enough to win a sample pack of Aurifil thread from Stacey at a Tilted Quilt. I won 2 mini charm packs from Jan at Sew and Sow Farm. I can't wait to try these new items in future projects.

Saturday night after an exhausting day helping my dad move, I sat down and finished the first square block for my Rubic Star. It went together easily and I just need to keep doing one at a time until I finish them.

I also started a new hexi project. I'm not sure how it will turn out, but I have all the hexies basted and ready to put together.

My hexie bag didn't make it to work today, so I pulled this one out of the drawer. I added the next pink flower on and some of the joining pieces.

Yesterday I was able to make the Star Surround for the QAL. It turned out really well and the colors are too dark here. I love that all the directional fabric goes the same direction. It took some extra planning, but it was worth the effort. This has turned into a mini throw quilt for a friends daughter.

This weekend while we were moving my mom's cutting table and 4 drawer chest to match made the trip to the new house. We'll be able to get it next weekend when we take the pickup. Mikaela and Mathew were playing with their cousin Cooper. He's a month older than Mathew, but lots bigger. Mathew is just starting to pull himself up and walk next to things. Cooper is walking on his own.

Here's hoping I get a lot of sewing time in this week, since we'll be doing more moving next weekend.

Posted by Moneik at 3:30 PM No comments: 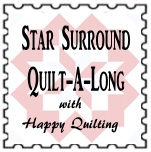 I've been so intrigued by the Star Surround quilt along, but didn't know exactly what I wanted to do. After finishing a quilt for my friend Amy this week, I decided to use the leftovers to make her daughter a doll quilt. I chose to make the 32" size and do one block. I used a directional print for the surround and I was kind of scared how it might turn out, but it was amazing! The directions worked out perfect to keep all of the fabric going the same direction. The only thing I had to do was wait to make the corners until I knew how the other pieces would go together. I finished it this evening and then put a top and bottom border on it. I think it will be a great throw for a little girl. I used up all of the surround, with enough cut to make the backing. I also made the binding, so maybe I'll get it quilted this week.

I also have a quilt made of 4 stars - 24" blocks cut out of another set of scraps. I used some fabric by Adorn it where the panel has owls on it. I'll work on making it this week. I love how this pattern easily uses up a bunch of scraps.

We went camping over the Labor Day weekend. Since I so often take pictures of Mathew, I thought I would try to get a few of Mikaela. She was less than cooperative. Here are a few from our Saturday morning, right after she got ready for the day.

Later in the day we went to the beach. Mathew didn't like the beach, but he did have fun on the shore.

Mikaela and mommy played in the sand.

Later in the evening we went back and Mathew played with Grandma Leslie.

He loves to stand up and wants to walk, just can't move the feet just right yet.

Mikaela was sporting her new water wings. She loves the water.

Last Saturday we went to Keystone for the Holy Terror Day Parade.

A sweet lady offered to take our family picture. It's been forever since we've had one taken.

He took her for her first moving pony ride. She loved it and wanted to go back again and again.

She was slow to learn how to pick up candy, but eventually she got it!

Grandpa Hugh, Mathew, and Daddy sat back and watched near the store.

Grandma Ann was on the Emporium float. Mikaela was too busy catching bouncy balls to recognize her.

It was a great day for a parade and lunch with grandma and grandpa. The kids were beat!

Posted by Moneik at 2:03 PM No comments:

Grandpa and Grandma are building a new house and daddy had to help with the foundation, so we tagged along and played at the ranch. There was lots of sand to play in.

Mathew hung out on the trailer with Grandma and his crawl ball.

He's just not so sure about the hat.

This was at the beginning of August and the house is almost ready. We're planning to help dad move this weekend.