This month I easily met my goal for A Lovely Year of Finishes. I had my little helper rearranging the blocks on the floor at the beginning of the month. We were able to get them into a pattern we liked and I sewed them together one evening.

The first weekend of the month we spent a day at my dad's house and I was able to quilt it up. I used a pink cowgirl minkee on the back.

I put the binding on the second week of the month and she's been sleeping with it ever since. She went with me to Club Sew last week and showed the new quilt she helped mommy make for her. 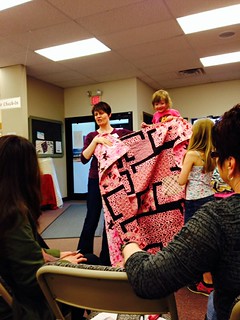 I am still working on Winding Ways blocks. I finished about 6-8 more this month. I figure if I can do 4 a month, that is a good number to work toward. They are easy to do, once I get in the groove. 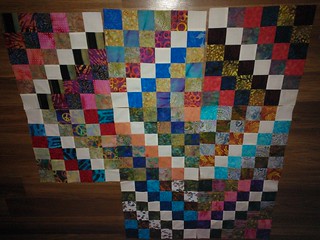 I also quilted up the giant star burst quilt. It doesn't have a home now, so it still doesn't have binding yet. 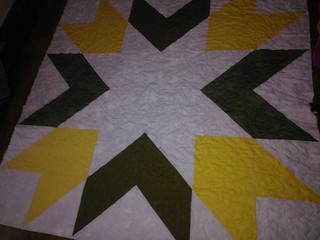 I finished the top of my Mystahhhhry quilt. I did some quilting, but am not sure I like it, so may take it out and start over again. 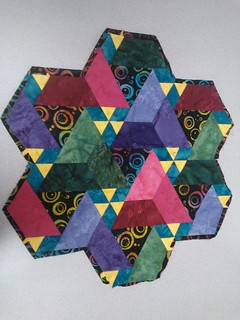 I also quilted and bound my mom's Loralie quilt. I gave it to her sister for her birthday this month. 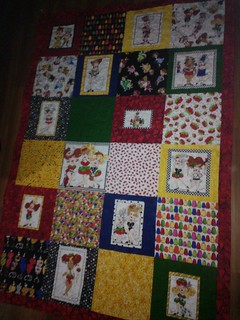 On another day I got out to dads and quilted up the scrappy Swoon. It needs something else before I bind it, so it isn't done yet either.

I made my friend Nicole a drag blanket for her new baby. 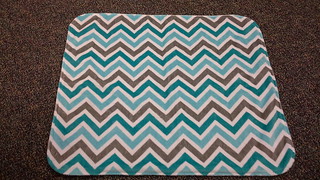 I finished up three bags for Mikaela's friends. 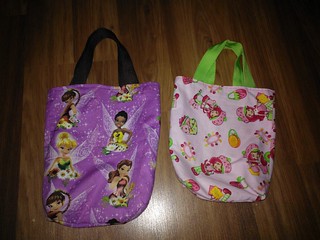 I finished a second drag blanket as well. This one will either be for Mathew or a gift. 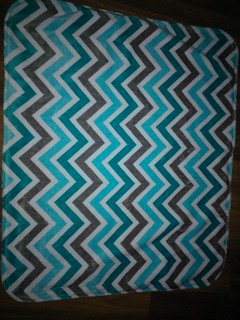 I also finished Mikaela's giraffe. This is the picture before horns, but it is done now. Although my friend says it needs a tail. 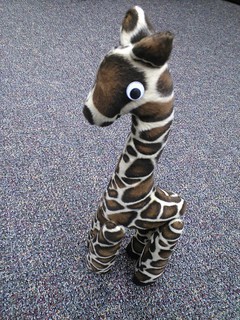 Mikaela showed her drag blanket at Club Sew the other night. It was so fun listening to her talk about sewing her first blanket. 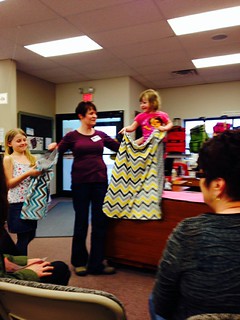 My girlfriends and I had a surprise baby shower for our friend Nicole B. who is having a baby in June. It was a sewing night. FR: Gaila, Nicole B. Jenn., BR: Me, Emilee, Tammy 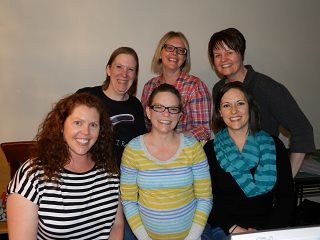 We were pretty silly even though no alcohol was involved. It's amazing how fun my sewing girlfriends are when we get together. 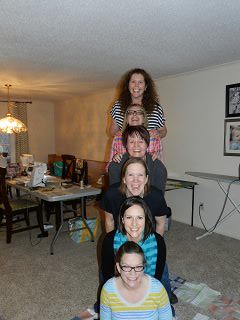 This is my favorite of us. Just being goofy. It's so good to have close friends. We all have kids, several around the same age, so we share a lot in common, in addition to sewing/quilting. 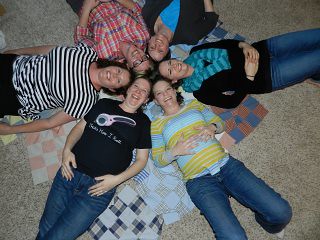 Finish It Up Friday

This week I haven't had a lot of time to sew at home. I did get a couple UFO quilts quilted, but they are sitting without binding. It's been a crazy week and I don't think they will get done until next month. I have a baby shower to go to this weekend, so last night I whipped up this minkee drag blanket. It's small, but will be perfect for a new little baby to cuddle with. I have a second one cut out that I will give to Mathew. 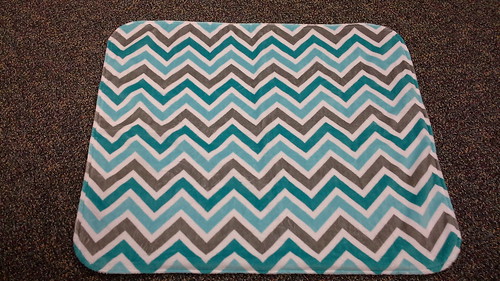 Tonight is Club Sew night and Mikaela is coming with me. She'll get to show the drag blanket she made as well as a bag and her new BQ4 quilt. She's pretty excited to go with mommy. She didn't want to go to daycare this morning. She had her backpack ready for club.

Linking up to Crazy Mom Quilts for Finish it Up Friday

With only a few big UFO's left on my list, I really wanted to get the ones I could finished up. They aren't for anyone in particular, thus the reason they were left to the end. This is Merry Go Round. It was a sample for a class I taught a couple years ago. It's not a hard quilt, but did get boring after a while. I struggle with using scraps, so I think that's why I do not care for it. I'm hopeful it will find a good home at some point.

I just did a meander on it with a cream/tan variegated King Tut. The backing is Central Park with a bit of teal from mom's stash.

I also quilted up the Scrappy Swoon I made at quilt retreat last year. I think it needs something, but I am not sure what. It just is too medium toned for me.

This week the weather finally turned warm, so we've been playing outside with the kids after work every night. Mathew is walking a ton and is such a happy guy.

Mikaela has mastered the tricycle and got a new bike for Easter, but it still learning how to ride it.

Linking up for Needle & Thread Thursday

My first attempt at Hand Quilting

Last night I stopped and picked up black thread to stitch my mystahhhhry quilt together with. I am doing my version of big stitch quilting. Since I don't know what I am doing, I'm winging it. So far I have two big triangles and 2 of the black ones done. I am not sure how much more I will do.  When I posted the picture on Facebook I said my mom was probably rolling over in her grave because I was hand quilting. When I first started quilting there there three cardinal rules I made for myself - No hand piecing, no hand quilting, and no scraps or stash. This little quilt covers all of those. I used scraps of my batik stash, hand pieced it, and am now hand quilting it. I would like to hand quilt my Rubic Star, so I figure if I can do this one I can do that one. 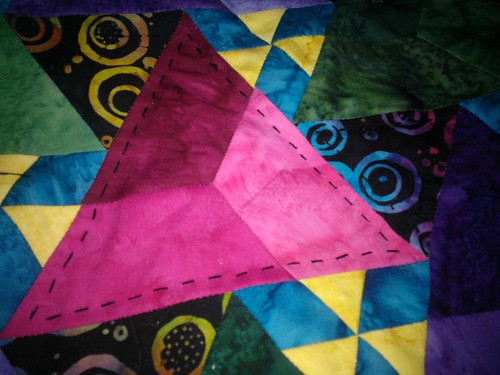 We've had a few nice days, so we let the kids play outside after daycare. Mathew's first time on the 4 wheeler and of course Mikaela had to be right there.

He's so happy all the time, but especially outside.

They love to play together and touch everything. We are waiting for it to warm up and stay that way, but that was not the case this week. It's been warm/cool/warm/cold/warm all week. This morning we got rain and cold wind. Spring will arrive, maybe in June?

This month I haven't done much English Paper Piecing, however the little bit of time I did spend on it was in finishing the top of my Chromatic Mystahhhhry. I have the batting and backing with it and hope to get some thread tonight so I can quilt it. I turned out okay for a mystery quilt. I also worked on a few more rows of my sewing table runner, but nothing new to show. 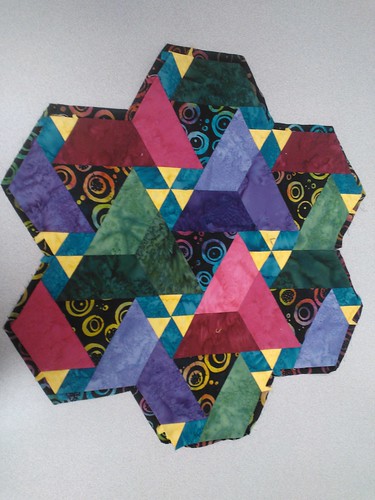 I've been slowly working on these winding ways blocks as well. They are turning out really nicely, but I only get a couple done each week. 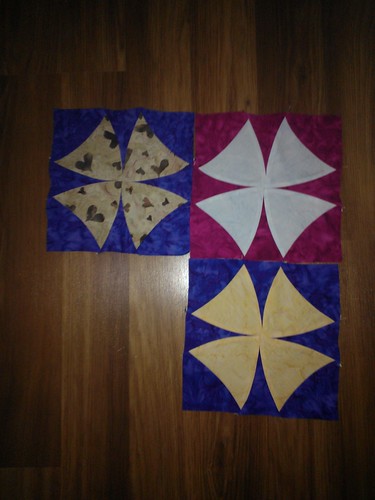 This week I put the binding on my mom's Loralie quilt. It's going to be a birthday gift for her sister, so I needed to get it done. The back is just as pretty as the front. 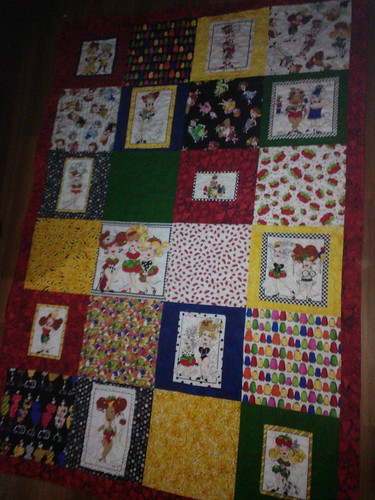 This morning Mikaela insisted on wearing a dress to daycare. She looked so pretty I had to take her picture. See all that batting on my cutting table? I think it's time to clean it up and figure out what to do with it. I have a lot of smaller pieces! I have one more quilt on my cutting table to put binding on, then I am all caught up again. 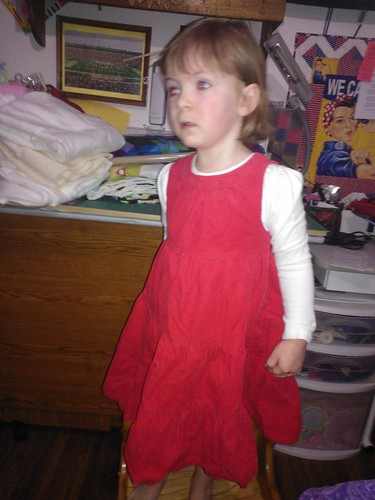 Linking up for the EPP monthly link up at Splish Splash Stash.

Posted by Moneik at 1:34 PM No comments:

Finish it Up Friday

This week went by so quickly! After a great day of quilting on Sunday, I had lots of binding to do this week. However, it was a very long week at work trying to meet the IPEDS deadline, working my third job every night, and teaching on Wed. night. I just didn't get much sewing done. Thursday marked the 100th day of sewing in a row this year! I've made a little time for sewing everyday and it just makes my life so much easier. Sometimes its at break or lunch at work, sitting and waiting at a Drs. office, doing hexie's while the kids sleep in the car, quilting at my dad's, or sewing at home in the evening. I can't wait to see what the next 100 days bring.

I finished one more block of the Scrappy Batik Trip Around the World. 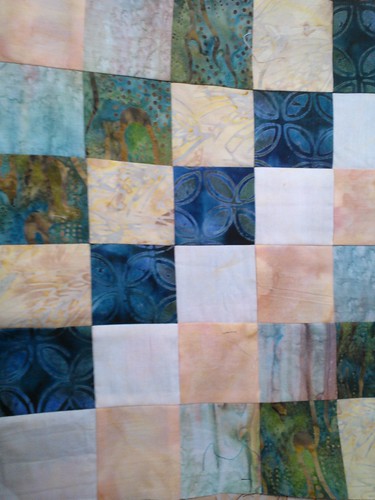 I put the last two blocks together last night and they look great. I put them in my box and I now have 10 of the 30 I think it is I am making. I need to do a bunch of strip sets so I have them to work on at lunch next week.

This week I finished Mikaela's BQ4 quilt. I squared it up and put the binding on it.

I cut the binding on the bias, but instead of doing my tried and true way, I tried another way. It didn't work out so well. I ended up with a lot cut in each direction, but not enough of either. Luckily I had a lot of the fabric left, so I just cut a few more strips. I ended up doing a wider binding and machine stitching it down since it's for a kid and binding by hand on minkee is just too much work.

This is the minkee back. It is a bit darker than the pink on the front, but it goes together well.

I tried to get pictures of the kids last night for National Sibling Day, but they weren't real interested in pictures. I did get a cute one of Mathew.

A blurry one of the kids. They are just too squirmy. Hopefully tonight I'll have better luck as we're going out to celebrate grandma's birthday.

Linking up with Crazy Mom Quilts for Finish it Up Friday.

Posted by Moneik at 1:35 PM No comments: