Swoon is in the bag! Okay, that's more literal then true. It's in baggies and ready to be sewn. I have been putting off working on my Swoon quilt for quite a while. I started it in March. We had a Swoon party at Gaila's and she's finished with her quilt. I worked on it in April or May at Club Sew, sewed too many of the wrong squares together and knew I had to rip, so I quit. Quite literally I put it in the bag and left it there, never to be worked on again. However, this week I've seen a lot of Swoon posts on Flicker and decided to pull it out again. When Emilee and I started Swoon we were going to do it as a BOM and have it finished by the end of the year. Well that's not happening, since I haven't worked on mine in months. I don't think Emilee has either. So I figured what better way than to pull it out and take it to work. Over the last several days at lunch, I have re-done the directions, un-sewed the blocks, and cut out kits for each of the remaining 7 blocks. However I soon realized I was cutting out for 7, but actually have 2 finished and 1 partially finished that doesn't need a kit. I've cut a few things wrong, but still have enough to be able to finish cutting out the kits. I put them all in baggies, so I can work on a block a week or so until I have all the blocks done. At least I know all the pieces are included and they are ready to start! It's such a good feeling to have these ready to go and be able to sew on them when I have time. 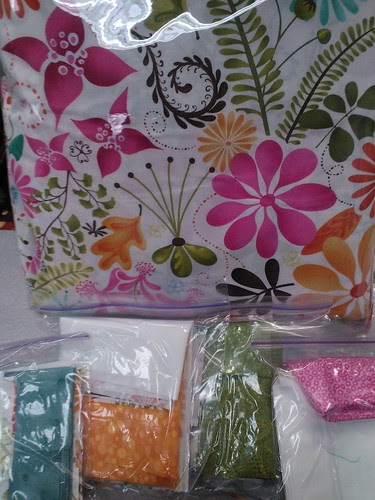 Our sewing room/bedroom switch happened over the weekend and I have all my sewing stuff in the laundry room, with the exception on my machines. I set up a temp space in the upstairs bedroom so I can sew at night until we get the hardwood flooring put in this weekend. My quilt frame also made it into that room to await the flooring. I'm really happy that I was able to have it there and not in the garage. So I'm keeping busy and continue to nest as well. It's surprising how much stuff you realize you have when you start moving. I just keep telling myself I got rid of 12 totes of stuff!

Can't wait to see Swoon come together. I did five blocks this past weekend...had a few cutting (and sewing) errors myself. It is easy to turn something around..but I am loving the blocks so it is worth it!